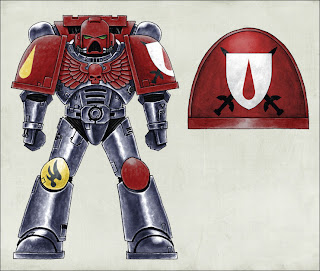 The picture above was used as reference to paint up my original Tactical Marine which was to kick start my Knights of Blood Army. 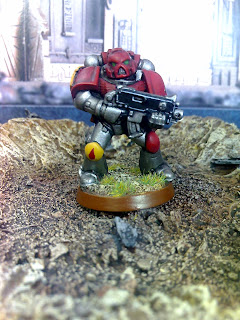 Sadly I struggled to get a nice rich red colour that I liked, even after several attempts. I also didn't do a good job on this guys eyes ( something that I have improved on in newer models ). I also thought the bright metal scheme didn't fit in with the brutal nature of these guys, they need something darker.

With my interest rekindled I did the shoulder pad sculpt and went as far as completing a whole squad ( see previous posts ). I formulated a plan to paint up my reds with a white base coat, hoping for that elusive rich red colour, but seeing as I did not have a white primer I used Skull White over a black primed base coat, several coats. I thought that the Red Gore paint would be dark enough to cover the streaky white coat but that was a big mistake!! After another couple of coats it was still a mess so I had to dump the entire squad into my Dettol jar and clean the mess up, unfortunately it removed all my greenstuff press molded shoulder pad icons $%£& !!!!!

The only thing I had left was my original model. 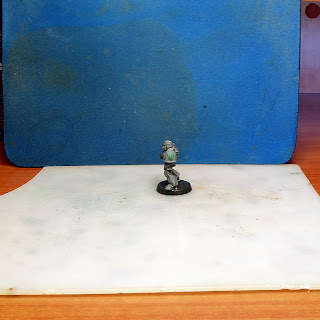 So I decided to paint him up first and get a good result before redoing any greenstuff molds on the squad. 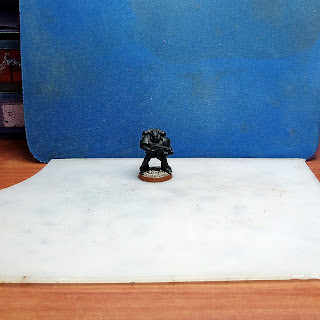 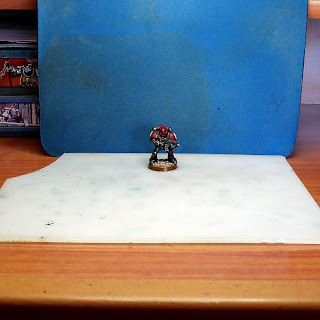 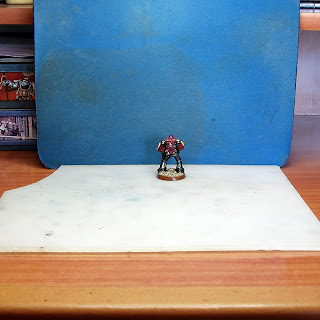 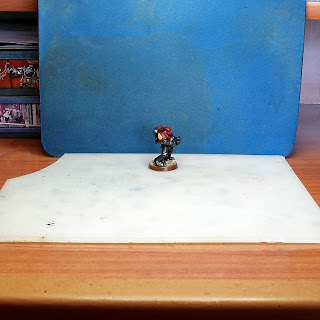 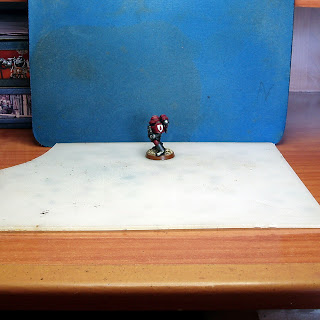 I began with a black base coat as always, then used a mixture of Black and Vallejo Silver Plata to get my nice dark metal colour that is more akin to the scheme in the Blood Angels Codex. I used the more traditional Scab Red base for the reds followed by a layer of Red Gore then another layer of a mixture of Red Gore and Vampire Red from Coat d' Arms. The photo doesn't really show the layering very well and the rich red colour is also less apparent. The shoulder pad icon was left as is without the addition of the crossed swords as I felt the main shield design was enough to identify them for what they are.

Just need to complete a few more details and will post up the final results.