Flames of War - Infantry Bases too High for Models? 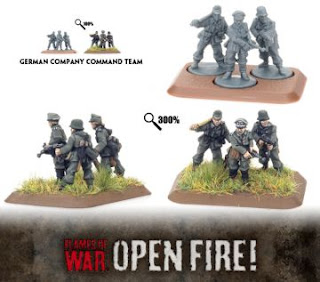 When Flames of War first came out I was initially put off by the bases of the infantry, in particular the height in relation to the model standing on it (picture above courtesy of Battlefront). The base is a few millimeters high and in 15mm scale it seems too high when placed next to a tank or vehicle.

However when the Open Fire starter set came out (all plastic) I could no longer resist and bought my box set. Now that I am finally getting around to painting the models up, tanks have no base so were no problem, I am faced with my initial problem, the base height. I thought about a solution and decided that card was the thinnest material that could be sturdy enough to do the job and set about making a card base for my infantry.

I took a base, drew an outline on card and cut it out. 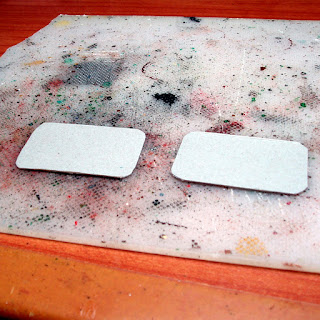 It was pretty flimsy so I painted white glue on one side, let it dry, then did the same on the other side. Once both sides had a layer of white glue on it the bases were more sturdy. I then glued the sand onto the base and the end result was remarkably sturdy. 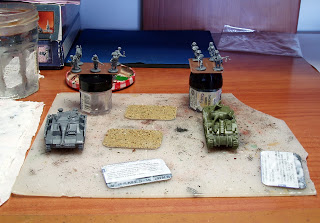 Just before I was going to prime and paint my bases I discovered something a lot better.....see next post.