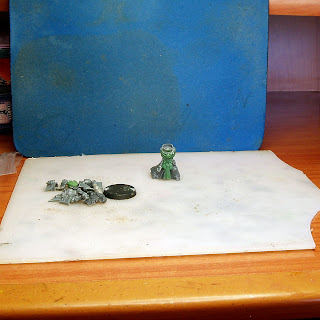 Next step was to use the mid section I cast up with the press mold. I cut the tabard section up as it is supposed to be a long scroll going down to the ground, hopefully when its painted it will look like that! I also needed to add an incense burner type thingy to the top part of the torso but my sculpting skills are nowhere near good enough for what is in the artwork this is based on, so I tried my best to roll up a ball and poke some holes in it, then sculpted an attachment for the rope plastic piece to attach on to. I then glued that to the model in what I hope is a natural look! I cant believe how difficult it is to poke holes in greenstuff and have it keep its shape, the ball kept deforming at every poke, very annoying. This conversion was getting more difficult by the minute.

The next big thing to sculpt was the icon on the back pack. It is three angels in a group bordered by a pointed square shape much like the front of a house shape you would draw as a kid plus some wings etc. I began quite well by buying the Dark Angel bits and cutting the wings of then gluing them together to form the trio. So far so good, next was the house shape?? I experimented with some plasticard but that didn't work as my skills not up to the task or my plasticard was to thick. I next tried to sculpt it out of greenstuff but my skills not good enough either. In the end I made a mold of the house shape and cast the piece then tried to cut out the inside to leave the hollow for the angels to fit inside. Unfortunately when I removed the cast it wasn't very smooth plus trying to cut out the middle was damaging the border even more as I went along so abandoned that.

So what I had left was what you see in the picture below. 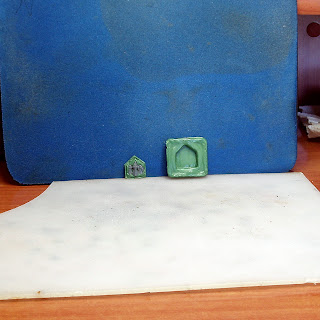 I knew the artwork was a basis for my conversion but my skills were never good enough for an exact copy so what I needed was an icon with 3 angels in it and some fluffy stuff to round it off.

The more I looked at the piece the more I began to see an Icon that was really ancient and worn and damaged by being carried into battle ( use your imagination!! ). I could visualize this Icon painted up to be a gold sarcophagus type box that held three angels which represented the chapter with a suitable worn look. I added some purity seals in the front to represent all the prayers and incantations the chaplain would need in the battle. 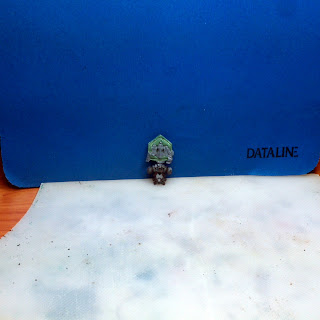 Some more purity seals to the rear plus the incense burner thingy and called it a day. 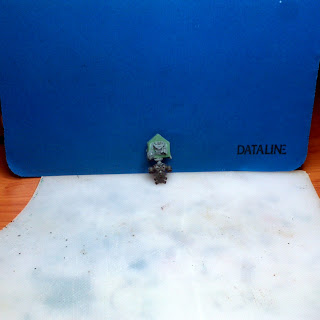 In the end its not a clean cut and polished piece but I think it will represent the idea of an ancient Chapter Icon very well.

Next up all the pieces are put together for the final look and of course the artwork reveal that inspired this conversion.