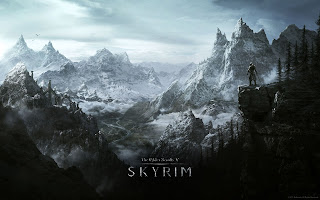 This is a shameless self interest plug for a blog I just started about Skyrim and the Elder Scrolls Games preceding this namely Oblivion and Morrowind. Wolfgar's Skyrim Blog

The blog will include mods I have made and of course some current WIP's. The main thrust right now is my renewed interest in playing Skyrim but from a totally new perspective.

A few days ago I stumbled across a series of articles entitled The Elder Strolls by Christopher Livingston The Elder Strolls by Christopher Livingston in it he starts off as a regular non heroic type guy and plays Skyrim from that perspective. I thoroughly enjoyed reading the 10 part series and then came across another similar example The Elder Strolls by Iris Ophelia / Janine Hawkins The Elder Roles which I also enjoyed very much. I really liked the idea of trying Skyrim from a non Heroic type perspective where the object is not to be Dragonborn and do all these quests etc. but to just survive as a normal NPC would, doing mundane necessary things like sleeping and eating and earning money from work as opposed to looting dungeons etc.

I think with some nice ground rules for your character to adhere to you could really enjoy Skyrim all over again in a totally novel way. So that's what I am going to do!

A MOD that comes in handy is Alternate Start - Live Another Life by Arthmoor which allows you to start the game from a large variety of places and characters.

I am starting off as a guy attacked en route somewhere and left for dead.

This character's rules will be:

No long term memory on awakening, you only remember that all you owned is gone in the attack
(you don’t know your roots or where you lived etc. Your previous life is gone you have to start again and carve out a piece of Skyrim for yourself)

No deliberate quest undertakings that involve dungeons, stealing, returning prisoners, saving the world or any heroic type actions
(taking a sword from a smith in Whiterun to the Palace in the same place is OK)

The purpose of these rules is to force me to play Skyrim from a more realistic perspective. For instance a trip to another city is something I will have to plan for in advance because it’s a BIG DEAL. I'll need to have money to spend the nights at inns along the road, food to last until I find an inn and a weapon in case bandits or wolves cross my path. It's dangerous out there for a nobody from nowhere.

If this is of interest to you please check out my blog.

Email ThisBlogThis!Share to TwitterShare to FacebookShare to Pinterest
Labels: Skyrim