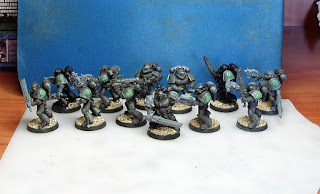 I have been wanting to continue expanding my Blood Angels army for a long time now but like so many hobby projects this year, other things intervene.

This squad is armed for close combat with mostly chain-sword and bolt pistols, I have also included some heavier weapons like Plamsa Gun, Melta Gun and Flamer but nothing that should inhibit movement. I have used backpacks but could swap out for Jump Packs if needed.

The other part of this squad I have worked on creating is the individual poses. To make the squad unique I have created a shoulder-pad press mould shield and blood drop icon out of greenstuff for the Knights of Blood  symbol , unfortunately I was not good enough to do the swords as well. The sergeant is a model from the Assault on Blackreach set, one of my favourites, with a right arm swap and boltgun  swap. Some of the other poses are a space marine throwing a hand grenade, another favourite pose, as well as a marine looking at an auspix. I have also converted one marine to carry a combat knife rather than a chain sword.

Stay tuned as I paint these guys up.