Creating a Space Marine Chapter - The End is Near! 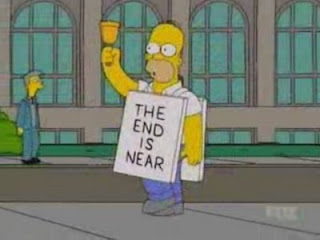 The end is near! Just one more twist in the tail left. To all those of you that are following this series I wish to explain the time frame involved in this creation of mine. I began the creation of my chapter with the purchase of the AOBR box set about 3 years ago now. Part One of my series took me about a year to get the Tactical Marine (blue and red scheme) squad fully painted, I was still mostly  into Warhammer Fantasy at that time. The U-turn followed about two months later, so a year and 10 months ago, with the new red and green scheme shown in my previous post.

Back to the story. After staring at my red and green miniature for a week I just couldn't see my chapter coming together. I was at a loss, should I try another scheme or change the background or just plain use a standard marine chapter? At the end of this agonizing week I decided to do two of the three.

First up, I put My 'Order of  Navaar' Chapter on ice. Both the colour scheme and the background, well at least some of the background. I did this because I like what I came up with and perhaps in the future they will take the field ready to purge all the Emperors enemies from the galaxy. For now though they would be placed in deep space hibernation (a storage box).

Secondly I needed a new scheme and a revised background. Since, at that time, I was more into Warhammer Fantasy I thought of how that could maybe help me. I collected an Empire Army and really enjoyed the various colour schemes, heraldry and fluff each province had. I had painted up my Empire Army in the Talabheim red and white scheme (read 10 years ago). Later I was drawn to other Provinces like Nordland with their nautical theme. Another province that caught my eye was the Averland Province with their black and yellow scheme and solar motif. 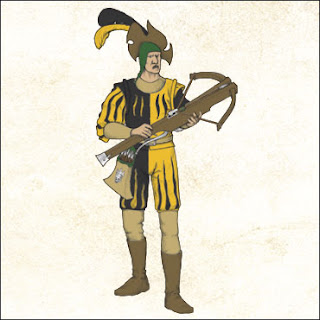 Of these two Provinces I liked the black and yellow scheme the most and set about creating my Space Marine Chapter using this scheme on the Bolter and Chainsword site.

This is what I came up with.

This scheme has it all, its unique, has one red arm to symbolize the blood spilled, black torso for the new background symbolizing the Chapters mourning the losses of their brothers and now the yellow/gold arm to symbolize the sun rising the next day over a victorious Chapter at the 'Battle of Blood River'.

Finally everything I wanted! 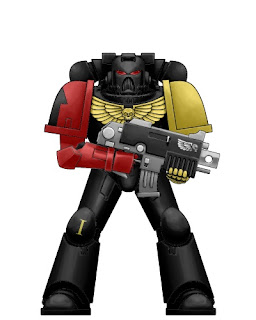 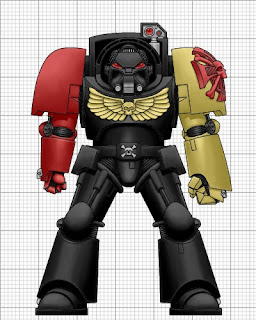 Here I was playing around with the various colours and looked at the possibility of a robed Marine. Everybody like robes, right? 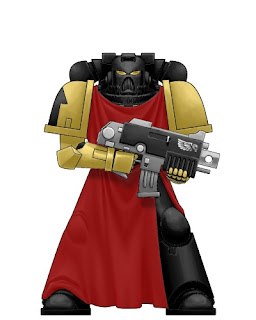 Again, just playing around with the scheme to see what it would look like without the red. 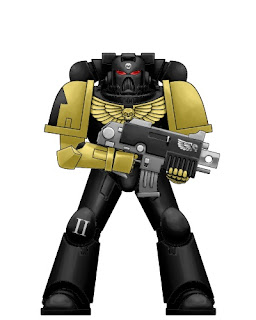 Ah the sweet taste of success! I lovingly took my test Marine into my hands and began to paint the first version of my scheme onto him. Admiring the brush strokes bringing my Chapter to life...two days later I looked proudly at my first recruit with his defiant gaze and ............to be continued
Please let me know what you think.
Vitor
PS : Next Up - Creating a Space Marine Chapter - Finally!