So after unboxing all my lovely shiny new plastic men I poured over the Space Marine Codex relishing the idea of seeing my army in all its painted glory striding across the battlefield laying waste to the traitors of the Imperium.

So many choices...Ultramarines looked good.....Salamanders were cool (or hot)....Raven Guard ( Death from above).......Crimson Fists nice fluff with Pedro Cantor........ohh man to many to choose from. Lucky for me the guy running the one and only hobby store in my area wanted to have some Space Marines painted up, to show off some lesser known chapters, for the store. I guess I was the only one that had the time or more to the point I was the one who needed the painting practice the most so he asked me to paint up two combat squads, one as Iron Hands and one as Storm Lords.

So off I went hoping to not do to much of a bad job and at the same time maybe I would like one of the schemes and start my own army off on a good brush stroke.

So here are some pictures ( from my mobile phone so don't be to harsh) of the Iron Hands, all free hand shoulder pad markings etc which I am sure you can tell. 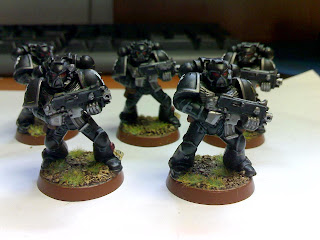 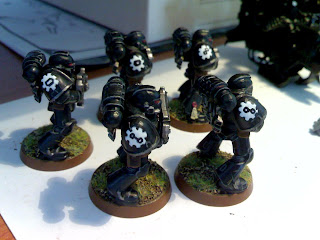 Then my nightmare painting lesson!!!

White over a black base coat!! Ohh why didn't I buy white primer!! It took about 4 coats of paint to cover the black.

Here are the Storm Lords, all free hand again. 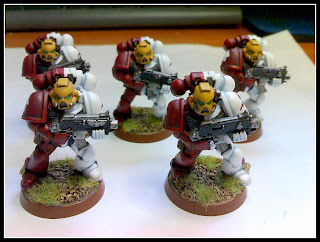 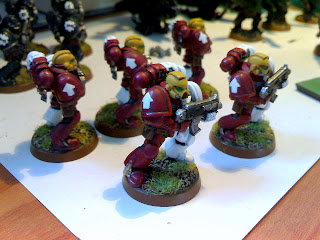 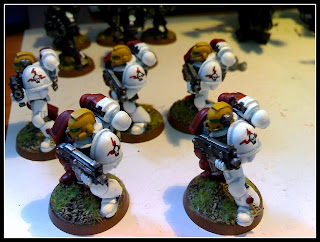 So they might not look so good but in the plastic they looked ok. I was surprised by the Storm Lords colour scheme, over an entire army I think this would look awesome!!

So all this resulted in me saying to myself, self if you cant choose a chapter then make one up, so I did.