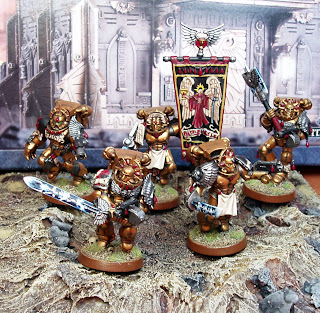 When these came out I was amazed by the GW paint job and the models themselves looked awesome! I had to have some, just to paint up if nothing else. When I got my hands on them I was even more amazed at just how detailed they are. I was really looking forward to painting up the detail on the models, all the gems, body armour, shoulder pads and that banner! The only thing I didn't like was the wings so I decided to leave them off on mine.

So off I went and then my enthusiasm was curtailed sharply when I hit my first hurdle which was the gold! I thought I had a fool proof recipe for great looking gold - Tin Bitz base followed by dry brushing highlights of Dwarf Bronze then Shining Gold - it didn't work at all, the lovely detail on the models looked awful! I had to go back and paint in the gold layering style, leaving the previous colour showing in the recesses followed up by lots of washes. That done I thought my problems were over and I could now enjoy painting these guys, wrong!! I started the gems and I struggled to get that 3 layered look on such small sharp edges. I ended up messing on  the gold so many times it defies words. I got so frustrated that I ended up just using a Red Ink wash over them to give them that shiny look and moved on. I then thought well I might try a power effect on the weapons as I usually go for the metal look on weapons, I saw a great little tutorial on the look I wanted and tried to follow it, I think it working only reasonably well. I think my state of mind was shot with these guys. I left the banner for last hoping it would be the turning point and up till the gems and scroll it was.

Any good things to say about my experience you might wonder. I learned a lot of things about my painting and hopefully it improved my skills. The angel on the banner came out really well, the shoulder pads did as well. The final gold look also ended up OK. One or two of the power weapons came out the way I wanted them to.  So all in all not to bad.

The final thing I can say about this kit is - the best use I got out of them is the ability to kit bash there bits, they have to be one of the best kits for that job, I have seen them nigh everywhere.

So enjoy the rest of the pictures. 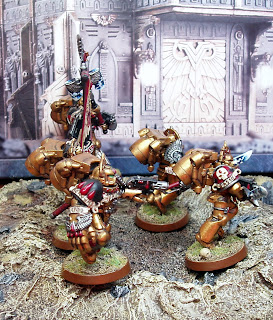 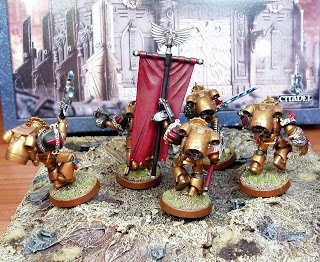 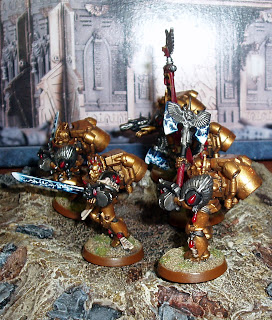 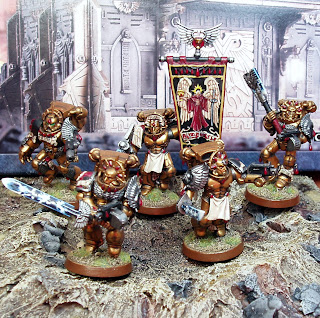