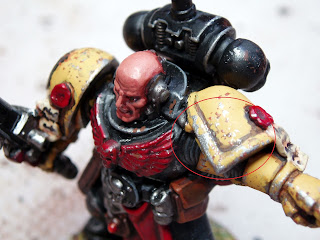 Having never painted battle damage and dirt on a miniature before made this exercise interesting indeed. This whole idea began with several posts by Ron at From the Warp where he delved deeply into the weathering subject and is by now an expert. I was inspired by his results and wanted to try my hand at it. The tools I used to apply the dirt and battle damage are seen in the picture below, an eyelash thingy (ask your babe) and a piece of sponge. 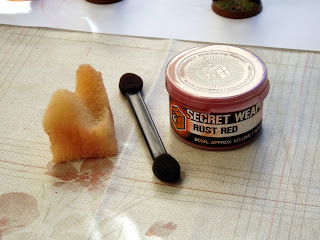 So what did I do, first off I used the sponge and dipped it into Scorched Brown lightly, removing most of the paint onto some tissue before dabbing lightly onto the areas I thought would be dirty, like the lower legs, around the shoulder pads and arms also a little bit on the head (it may be a good idea to do this on some paper to see the effect before going to the model). Just a few dabs produces a lot of speckles of paint on the miniature so if you want that minimalist look then don't use this technique. Next I repeated the process with Boltgun Metal for the damaged paint of the armour, basically going over the dirt but concentrating more on the armour edges where the wear and tear would occur. Finally I used a brush with Boltgun Metal to do some edge highlighting on the armour plates. 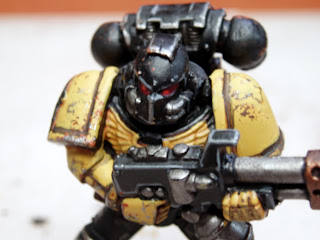 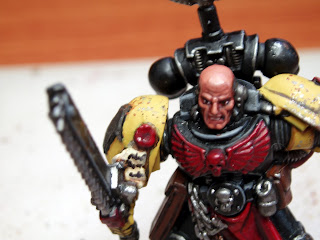 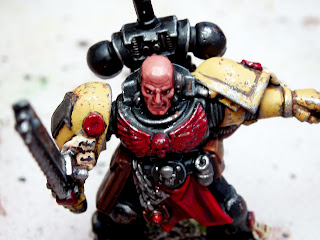 Now for some this is way toooooo much but for me I want my marines to look like they are regular visitors to hell and are on a first name basis with the devil. Go Marines!! be all you can be!!  (I am not even an American) Moving on, keep in mind that these pictures are magnified and the actual scale miniature looks much better.

Next up is the application of the weathering powder/pigment. Stay tuned.