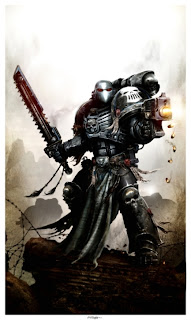 
My humble test subject has been sitting on my desk waiting patiently for me to decide what to do next, well he doesn't need to wait any longer as he is destined for the battlefield clad in Silver Skulls livery! All due to this amazing piece of artwork by, I believe, Clint Langley.

But wait there is lots of testing to do on him!

I wanted to have a go at trying to sculpt something in greenstuff.
I wanted to use my press mold again.
I wanted to see if you could paint without using primer.
I wanted to try out the object source lighting thing!!

To recap I removed his old paint job using Dettol, see my labels for the post.

Next was trying to sculpt something in greenstuff, well what easier thing to sculpt than a skull? Unfortunately I did not record a step by step in pictures but this was the procedure I followed. I took a small bit of greenstuff and flattened it out on the shoulder pad into a circle, very important make sure its equally thick! Mine wasn't so it screwed up the sculpt in the end. Next cut away the parts you don't want starting with the cheeks, then the eyes and finally shape the jaw and cut out the teeth. 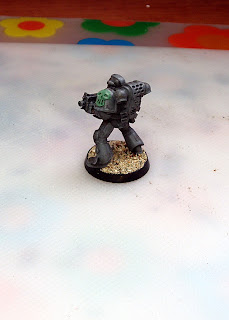 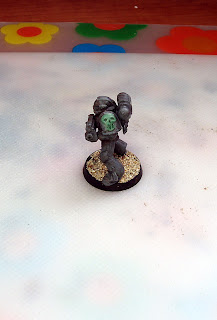 Because mine wasn't equally thick I had to file down the skull and it exaggerated the mistakes in my sculpt. Also use an agent to keep things smooth, I used water but I think oil or lip balm would have been better. For my first ever sculpt it's not to bad, at least it removed the fear of sculpting in greenstuff for me. With more practise it will improve. 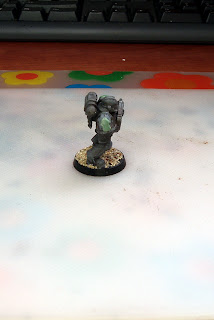 Next up was the press mold for the tactical marking on the other shoulder pad again see my labels for how to do this. 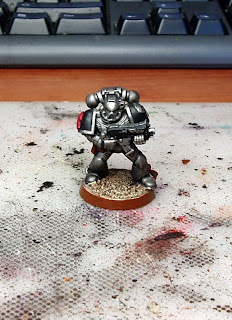 Now it was time to start painting without a primer, I went directly to my black base coat as if it was a primer and then painted him up roughly to get an idea of the end result. 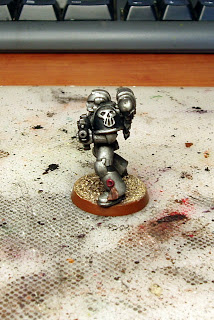 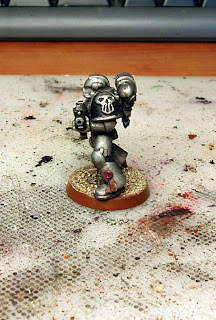 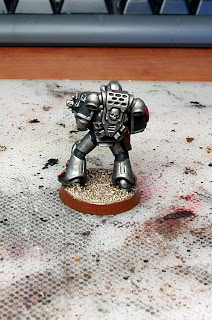 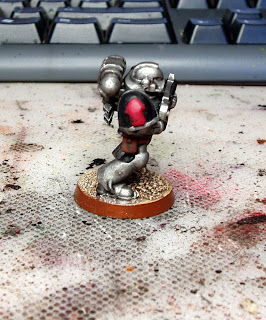 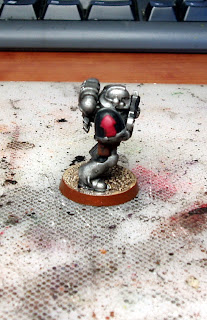 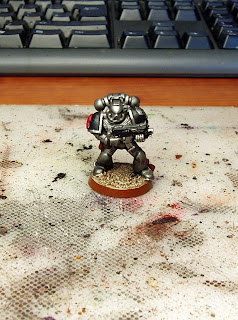 As you can see all my tests came out reasonably well and I am happy to declare them a success, with the exception of the object source light thing (OSL) which I didn't get to yet.

The object source lighting test will be a addressed in the next post where I finish the paint job.