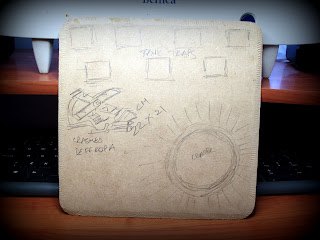 This series of posts is from my previously lost archives and will now see the light of the web! My previous posts on terrain ( craters, tank traps, fence, ruined aquila and the ventilator) have been building up to this apex, namely putting together basic pieces of terrain to form a nice larger show-piece or focal point for your gaming board.

The piece below from GW inspired me to start on this entire process. 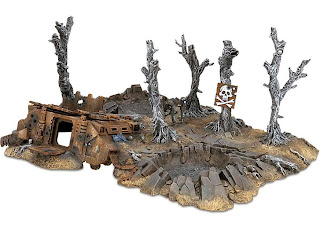 I originally wanted to make something very similar to the GW piece but I don't have the budget to wreck a Rhino for terrain purposes and even used ones on Ebay are pretty expensive. So I used the cheapest model I could find on Ebay at that time and that was an Ork Deffkopta form the Assault on Black Reach starter set. I then added craters to the design but went for tank traps rather than trees.

So the terrain piece is of an Ork Deffkopta crashed into tank traps after being shot down and or engine trouble with some craters from ordinance and some tree stumps for added effect as a homage to the original GW piece. I sketched these out on my hardboard base to see the layout and once happy I started to collect the pieces together.

I cut the rotors of the Deffkopta so they would look 'shot down', then cut out my tank traps from foam-board and for the lip of the crater I used some off-cuts from the foam-board tank trap pieces. I then lay the pieces out, including a twig from my garden, on the base to get an idea of what the finished result would look like. 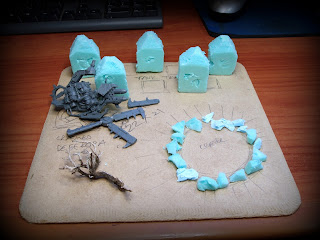 Once I was happy with the layout I proceeded to finalize the base.