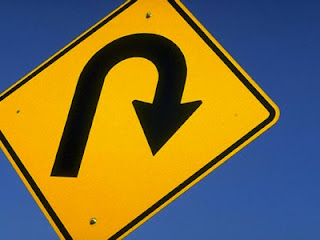 After finishing up my squad of Tactical Marines in my own Chapters, Order of Navaar, blue and red colour scheme I had to take a break, due to real life taking up all my hobby time, for about two months. When I re opened my box containing said Marines and took them out I realized just how similar they were to Crimson Fists. Now I knew the scheme was similar before I started painting them but I thought over the whole squad and army it would be more differentiated. WRONG the bigger the squad/army the more similar they looked. 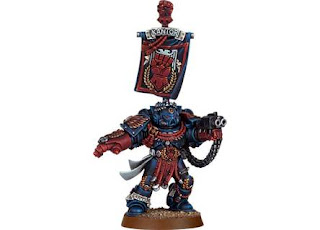 So what to do now? quite frankly I was a bit annoyed that I spent all that time painting up my squad of Marines for nothing (At least I got some much needed painting experience). I broke out my spare test Marine and thought about the next step. I liked the background I came up with, the red arms coming from the blood in the river etc. Well I could change the blue armour for another colour, how about black to symbolize the heavy losses of the battle?  I started to look through the internet to see what other chapters were out there and found this. Marines Exemplar. The exact scheme!! 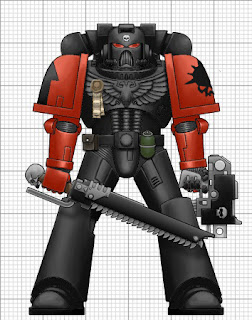 Very annoying!! this creating your own chapter stuff is more difficult than I thought by far!

I decided to go green, Sons of Medusa style, had a look on the web and didn't come up with anything so I quickly grabbed my spare Marine, just in case anybody got any ideas before me and painted him up in the new scheme to see what it would look like. 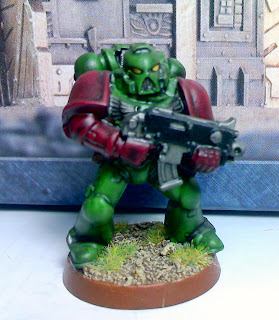 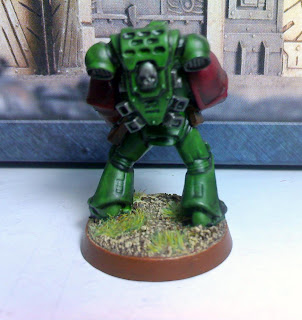 I used snot green with a heavy wash of thraka green for the body and the arms were done in scab red and washed with a mix of baal red and devlan mud. I didn't do anything else, I just wanted to see if the look was going to work.

I think it might have promise, maybe a Dark Angels green would be better?

What do you guys think?


PS : Next up my entry for the Miniature Wargames Contest

Email ThisBlogThis!Share to TwitterShare to FacebookShare to Pinterest
Labels: Order of Navaar