Warhammer Fantasy - Empire Standard Bearer - Blast from the Past 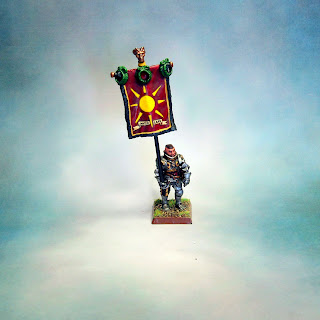 This model I painted about 5/6 years ago and was important to me because it was the first time I really had a go at painting a free-hand design (the banner) on a miniature. I discovered it whilst rummaging through a forgotten storage box of bits etc that I had laying around and though I would show it. It was also significant finding it again because I could compare how my painting technique and style has changed and hopefully improved.

A bit of history on this miniature and me, I originally was attracted to Warhammer Fantasy when I discovered Games Workshop circa 2000 and the Empire was the first army I collected, painted up and managed a few games with, maybe 30 games in total. The army followed the tried and tested methods of GW and were painted up in the colours of Talabheim, red and white, which looked pretty good. 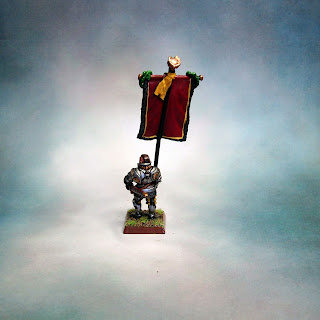 This miniature was part of that army and I repainted it in the colours of Averland as I wanted to start a new army for 7th edition. Unfortunately I never really liked 7th and I hate 8th Edition so that spelt the end of my foray into Warhammer Fantasy.

The moral of the story is try new things, even if you suck at it (see how bad I was in the next post Freehand Painting - Taking the Plunge). By having a go you will get better at whatever you are doing, in this case painting freehand. Now I am even attempting sculpting small stuff with greenstuff !