Flames of War - 5 Gebirgsjagerkompanie - My Army

Thanks to those that helped with information on my previous post. Based on this information and the digging around by myself I have decided to go with the 5 Gebirgsjager as my first army. While they are my second choice to Fallschrimjager, I can live with it as they fought alongside each other in Italy and in the FOW army list they can be included as a supporting unit, so I still get to play with them or collect and paint them up as unit.

The next reason is that with minimal greenstuff conversion, just backpacks, I can get away with using the 'Open Fire' starter set German models.

Here are the justifications. Examples from 'Osprey Publications'

Picture below shows soldier wearing steel helmet and carrying gas mask, albeit in mid-war. I know the Gebirgsjager preferred their Caps but in battle common sense prevailed and probably most wore helmets. 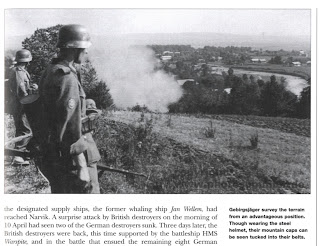 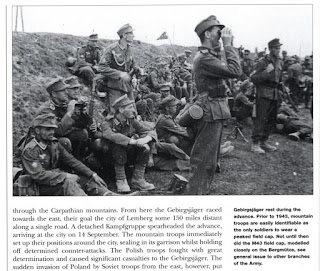 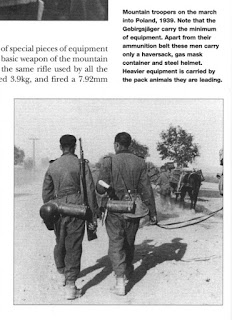 So not so far fetched that some would still carry gas masks in late war 'just in case'.

Now onto the painting scheme. Here are some examples from 'Osprey Publications' showing three variations.

The first is the classic uniform everyone seems to think of first,

the second and third is still valid but looks almost identical to a normal 'Heer' soldier except for the boots and backpack. 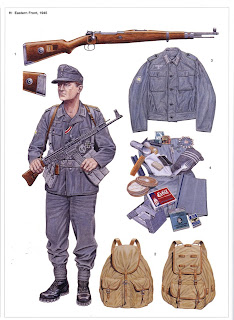 Glad I got this decided as I have just started painting the crew of my Pak40, they will be painted up as example two with the officer as example one since he has a jacket that looks similar the Gebirgjager jacket.