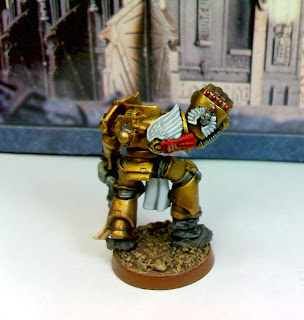 My plans of finishing Tycho on the week end didn't work out but I did almost get him finished. Above you can see the completed angel on the shoulder pad. I also made a concerted effort to improve my gem painting skills and the gems here are much better compared to the ones I painted on my Sanguinary Guard unit. 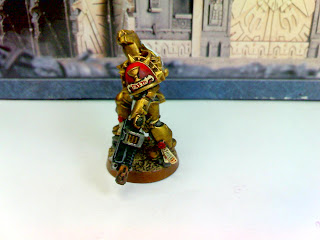 Here is the other shoulder pad were I again made more of an effort to have a bigger contrast in the blended red areas, you can actually see the light to dark gradations. My Knights of Blood Terminators in the pictures the blending is non existent, so either my camera skills are improving or my painting is?? I also used a micron pen for the lettering on the seals. 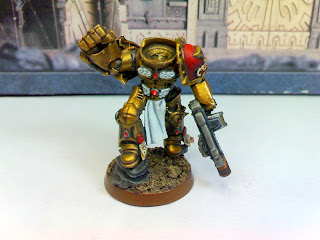 You will have noticed that his head is missing, well I painted that separately and also I was not sure of how I was going to represent his damaged face. One idea was to sculpt the mask on but my greenstuff skills are nowhere near good enough for that. The other idea was to get a head with a metal bionic half and sculpt the hair part on with greenstuff. The third idea came from Ron at FromtheWarp where he painted a tabard out of cardstock to look like leather strips, see link here http://fromthewarp.blogspot.com/2011/06/adding-detail-to-other-areas-of-your.html . I decided to try Ron's method and took a normal Blood Angels head and began to paint the mask on the face with a black base coat as I want a metal look to contrast with all the gold on the model. Also I will paint his hair very yellow to match the Blood Angel figure in this picture of the Primarchs at the bottom. 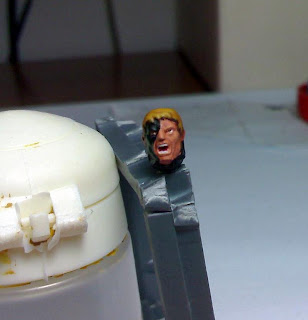 Well that's as far as I got, will complete his head later.

Next post Tycho will be revealed with all his body parts attached.