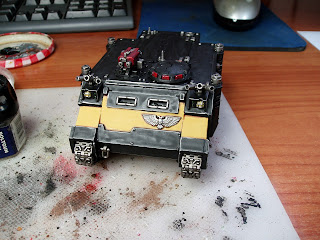 This is where I got to before going on to my experiment with pigments or weathering powders. I ordered some Secret Weapon Pigments and decided to start on the underside and tracks of the Rhino in case things didn't go well, then I would not have to re-paint the whole thing. I must say that I initially got interested in pigments from reading Ron at From the Warp series on the subject, so check his out if you haven't already.
So first off I started to apply the pigment to the underside and came across my first problem, after a couple of dips in the pigment with your brush it flares out and is useless for detailed application. I grabbed my pretty beat up old brush, almost tank brush size, and just got the stuff on there hoping that it would clean up in later stages. 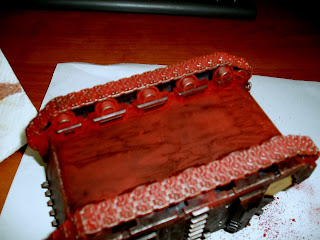 As you can see it was a mess, my next lesson learned was that this stuff is messy!! so make sure you are working on a large sheet of paper to collect all the excess as you can just pour it back into the pot to reuse. Don't touch your face with this stuff on your hands :)

Next step was to take a stiff brush and wipe away all that excess. 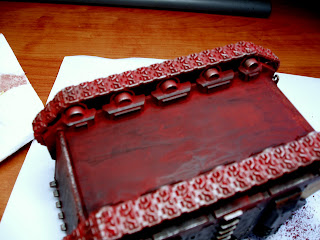 As you can see a fair amount was removed with the brush. The next step was to set the pigment with alcohol. I used a local alcohol and applied it liberally. 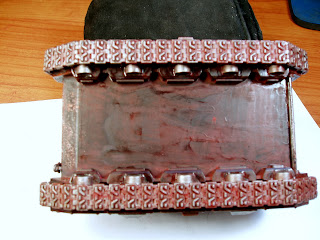 It worked really well in setting the pigment, in fact it was quite sticky until it dried so be careful not to touch it. The alcohol also, as I was hoping, did tone down the whole effect. The next stage was to then proceed with the bottom of the vehicle and work my way up to the top. I used my large used brush to add pigment to the lower portions around the tracks and the rear and front in a slightly more controlled manner. 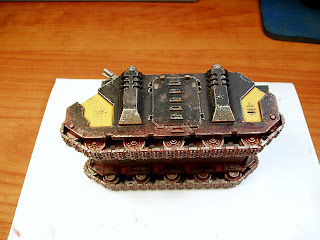 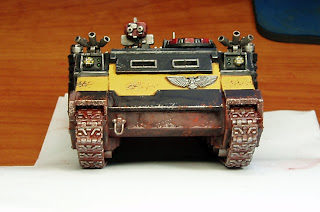 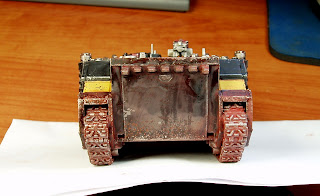 The alcohol did its job as expected but with one very strange result, it turned white??? like the frosting you get when spraying a mini with sealant. I think it must be the brand or type of alcohol I am using as this problem does not seem to plague others.Well what to do now?? I pulled out my Black Wash and gave the area a good coverage to see if that would help. 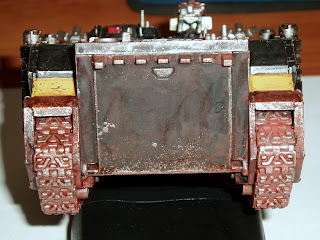 The wash did help a lot, thank goodness. The pictures don't show it as clearly but it removed the frosting look and didn't cover up to much of the pigment.See below for some close ups. 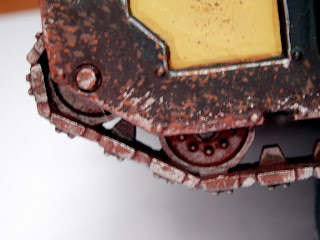 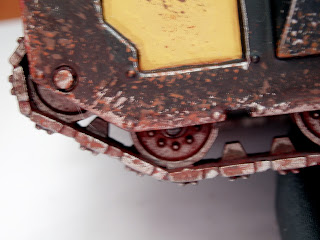 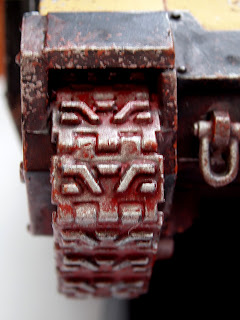 So far the experiment is teaching me loads and is kind of going in the right direction. So last but not least the rest of the Rhino will be done in the next post.
Vitor.